How to Treat PTSD With Hypnotherapy

How to Treat PTSD With Hypnotherapy 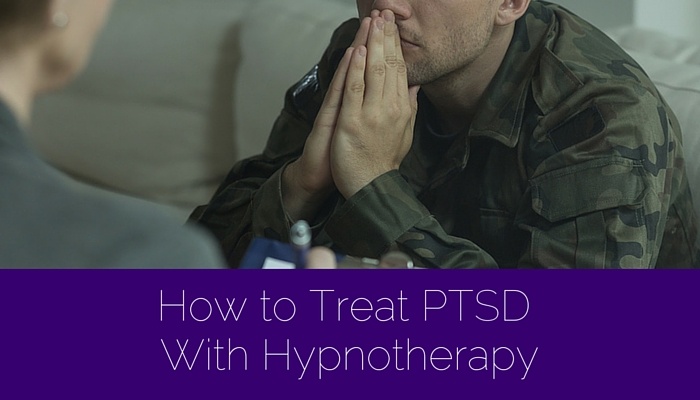 Hypnotherapy has emerged as a credible, evidence-based treatment option for sufferers of PTSD.

PTSD, Posttraumatic Stress Disorder, consists of a series of symptoms that arise from a traumatic event which occurs in one’s life. The symptoms of PTSD usually consist of:

Another common thread is that certain people or situations may suddenly remind the person of the traumatic event. We call these triggers.

WHAT IS A PTSD TRIGGER?

An example of a PTSD trigger is anyone who has served in combat who may be walking down the street and hears a car backfire and reacts in a similar manner to when they were in a high-stress combat situation, re-experiencing the past as if it were happening right now.  The trigger from the car backfire may cause this combat veteran to begin to sweat, feel his heart pounding, his breathing may increase rapidly and he or she may even find himself running for cover. The triggered PTSD veteran may begin to have flashbacks where intrusive memories flood their mind and they may, for some period of time, feel like they are actually right back on the battlefield

Trigger events can be very disconcerting for any victim of PTSD who does not either know they have PTSD, or are unfamiliar with their own particular triggers. PTSD often goes undiagnosed by the medical profession and even in the psychological community. Common examples of undiagnosed people with PTSD can be adults who, as children, grew up with parents who were alcoholic, where there was violence, yelling, fighting and bullying in the household. A person who was physically, emotionally or sexually abused during the formative years most likely has grown up with symptoms of PTSD without it ever having been recognized or treated as well. Familiarity with the principles of the mind through hypnotherapy gives us the most effective tools to truly recognize, diagnose, and then treat PTSD.

Hypnotherapy can be a powerful treatment for PTSD because it treats the issue at it's core: the triggers. Heal the triggers, heal the person.

Because hypnotherapy is primarily a method for accessing and treating the subconscious, it's perfect for PTSD and countless other issues that originate in some type of trigger or locked away memory. If you are a therapist looking to increase your ability to access the subconscious mind, becoming trained in hypnotherapy with a reputable organization can help you learn those skills.

Previous How Does Hypnosis Work?
Next Hypnotherapy for Weight Loss: How is it Different than Hypnosis?
Categories
Recent Posts
Recent Posts