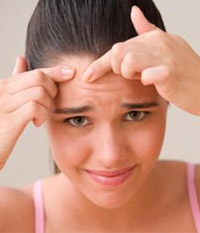 Hypnosis is a tool with many useful applications dermatologic. It involves guiding the patient into a trance state for a specific purpose such as relaxation, pain reduction, or habit modification.

Hypnosis can regulate blood flow and other autonomic functions not usually under conscious control. The relaxation response that occurs with hypnosis also affects the neurohormonal systems that in turn regulate many body functions.

Hypnosis may be used to increase healthful behaviors, decrease situational stress, reduce needle phobias, control harmful habits such as scratching, provide immediate and long-term analgesia, ameliorate symptoms related to disease such as pruritus, accelerate recovery from surgery, and enhance the mind-body connection to promote healing. Hypnosis can be especially helpful when dealing with skin diseases that have a psychosomatic aspect.

The efficacy of suggestion in treating warts has been confirmed numerous times (Sheehan, 1978). Numerous reports attest to the efficacy of hypnosis in treating warts. In a well-conducted controlled study that serves as a typical example (Surman, Gottlieb, Hackett, & Silverberg 1973), 53% of the experimental group had improvement of their warts 3 months after the first of five hypnotherapy sessions, while none of the control group had improvement. Another randomized controlled study with similar findings was that of Spanos, Williams, and Gwynn (1990). Hypnosis can definitely be helpful as complementary or alternative therapy for warts.

Stress plays an important role in the onset, exacerbation, and prolongation of psoriasis. Hypnosis and suggestion have positive effects on psoriasis. Tausk and Whitmore (1999) performed a small randomized double-blind controlled trial using hypnosis as adjunctive therapy in psoriasis with significant improvement of highly hypnotizable subjects.

For a complete journal article (Journal of Heart-Centered Therapies) on the uses of hypnosis and hypnotherapy on psychological and phisical conditions, we invite you to view it here.